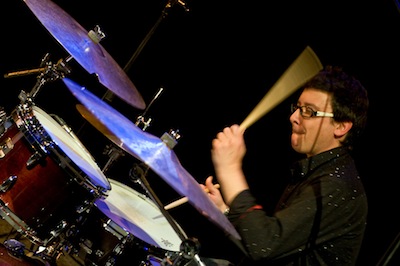 Born in Badalona (Spain).
When he was a child, he listened to jazz records at home, because his father was a fan of Art Blakey, T. Monk, Max Roach, Miles Davis, The Modern Jazz Quartet… At the same time, his sisters were listening on the radio station to some funk & soul music (James Brown, Ottis Redding, Sly & The Family Stone, Aretha Franklin…)
From the age of 10 to16 years he studied piano in Conservatory of The Liceu’s Theatre in Barcelona. The drums was his main instrument from the beginning, but he played it by self-taught.
From 1985 he had been member of a lot of groups in the Barcelona area, and he also leads his own quartet.
He’d played and/or recorded with John Abercrombie, Dave Douglas, Vince Mendoza, Dave Liebman, Fred Hersch, Norma Winstone, Tete Montoliu, Mark Feldman, Kurt Rosenwinkel, Ben Monder, Art Farmer, Charles Tolliver, Dave Schnitter, Chris Cheek, or Mulgrew Miller.
He plays in more than 80 jazz records.

• In 2009 achieves a higher degree studied jazz at ESMUC.
• In 2008/09 he joined the faculty of the Jazz Department at the Conservatory of the Liceu.
• In March 2003, has given a lecture at Taller entitled «Drummer: a provocateur. Philosophy and role of drummers. »
• In 2001, he obtained a place to exercise ESMUC Professor (High Degree School of Music of Catalonia)
• 1992 N. Classes Charlie Persip York and Vernel Fournier.
• In 1991 he qualified as a Level of INCANOP.
• 1985-92: Professor at Taller de Músics.
• 1981 – 1983 Studies of harmony, music theory and drums in the Jazz and Modern Music Workshop teachers such as Angel Pereira, Pipo Tudurí, Andy Phillips, Antonio Peral, Daniel Roth…
• 1983 – 1986: Harmony, Battery Combos at Taller and teachers such as Aldo Caviglia, Zé Eduardo, Luis Vidal …
• 1974 – 1979 Studies at the Liceu Conservatory of Music (Music Theory and Piano)